Robert the Bruce’s daughter by his first wife, Isabel of Mar, experienced a tragic life by anyone’s standards. The child was left motherless at birth, whilst her father was caught up with the vicious war between Scotland  and England.

Logic suggests he would have entrusted her care to his sister, Christina – or Kirsty as I know her in Sisters of The Bruce, who had not long married Garnait, heir apparent to the Mar earldom. At Kildrummy Castle, in Scotland’s far north east, Kirsty may well have been at Marjorie’s birth and borne tearful witness to Isabel’s tragic demise.

Marjory’s relationship with her father may have proved to be an ambivalent one for she would have scarce known him from his sparse visits north. But when Garnait died, Robert was granted wardship of the new Earl of Mar – Donald, Kirsty’s young son, then he would have had greater official time to visit Kildrummy, and his young daughter, to oversee the running of the earldom.

By 1306, Robert was crowned King of Scots but the Bruce fortunes were at low ebb following his defeat at the Battle of Methven. Robert and his supporters were scattered to the wind and his female kinfolk escaped north.  Shortly thereafter,  an English army bearing the feared Dragon flag approached the great castle of Kildrummy. Along with her stepmother, Queen Elizabeth, and her aunts, Kirsty and Mary, Marjorie escaped north. Kildrummy was placed under siege. 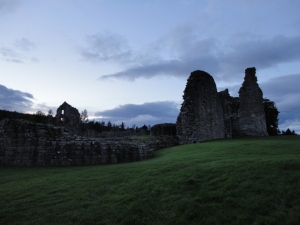 The frantic women rode onto Tain where they were captured. They were taken before King Edward who pronounced sentence. Mary Bruce and Isobel of Buchan, a  Bruce supporter, were imprisoned in cages as was Marjory. The eleven-year-old was placed in a cage on the walls of the Tower of London. The child would have been not only in fear of her life, but traumatised by the winds, the height and the cold. To add to her fear, she must have heard the lions roaring from Edward’s menagerie. Eventually, Edward responded to his queen’s calls for clemency: Marjory was transported to a Gilbertine nunnery at Watton in Yorkshire whilst her aunt, Kirsty, was dispatched further south to a convent at Sixhills. There they remained in solitary confinement for eight years until their exchange in 1314 for English knights, held hostage after the victory at Bannockburn.

This young princess of Scotland languished in the care of nuns, known for their loyalty to England and by default, hostility to Scotland. How did this affect her, you might ask? Friendless and alone at such a vulnerable age, far from home and nurture, it is likely she experienced chronic loneliness and an abiding fear for herself and her family. Such grave and sustained psychological damage might have caused debilitating bouts of depression and anxiety for anyone exposed to such trauma.

Later in 1315, she married  Sir Walter Stewart whose family carried the ancient heritary title of Steward.  One gets the sense that this was a politically motivated marriage, for her father badly needed an heir and his wife, Elizabeth, was past her best childbearing years.

History tells us so little of Marjory’s personality or mental state but the circumstances around her death suggest that things were not well with her. Heavily pregnant, she was out riding a short distance from Paisley Abbey when she fell from her horse. Why would she ride so late in her pregnancy? Was this mere recklessness or an indication of some more dire intent?

Marjory  was taken to the Abbey where she died.  Reports from the Abbey suggest that a Caesarean section was performed. Was this done by a physician, miraculously on hand, or a monk, I wonder? What desperation must have guided them to take the child of a dead woman. Religious views at the time held that a child had to be birthed so that it could be baptized. Or were there considerations that this was the grandson and sole heir of Robert, King of the Scots?

Marjory’s son was named after his grandfather and later founded Scotland’s famed Stewart dynasty.  Her solitary tomb stands in Paisley Abbey, a solemn tribute to her ill-fated life.

3 thoughts on “The Ill-fated Life of Marjory Bruce, Princess of Scotland”