WILLIAM WALLACE and the BATTLE of STIRLING

September 11 is well-known around the world for a tragedy of global proportions. But in 1297, in Scotland, it was a day of great celebration for William Wallace had engineered a victory of such gravity against a much larger and better equipped force of mounted  English knights and foot soldiers. Today, we will be exploring the themes of courage and intuition. 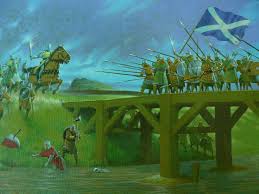 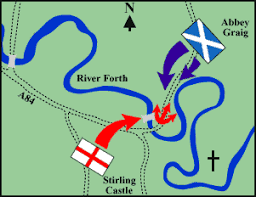 I’ve always been impressed at the extraordinary generalship shown by the Scots like Wallace, Bruce, Douglas and Randolph in choosing the terrain to suit the military needs of a smaller force. The English, on the other hand, show themselves to be more rigid in their approach, seeking to engage the enemy on broad expanses where their armoured war horses, the great destriers, could thunder along and trample the enemy underfoot. There’s often a hint of arrogance too as they come upon the Scottish rabble, dressed in rough plaids, barelegged,  brandishing more farm implements than swords and lances, but this cockiness soon sours when they realize they’ve been led into a trap.

Wallace exercised his intuitive capacity to make use of the land and chose to confront the English force at the choke point of Stirling. If  you look at the map of Scotland you will see the strategic value of the site, where forces heading north must find a way through the boggy land alongside the River Forth to cross the wooden bridge at Stirling.

Nearby, the great castle towers over all. The clash of swords and cries of the dying must have drifted up to the occupants who watched the death and mayhem as soldiers and horses lost their footing in the sustained attack, falling from the bridge to drown in the river below. Did the river run red?  I suspect it did! Several legendary stories have arisen from this battle.

One which amuses me no end is how Wallace goads the English commanders to attack. Here Wallace intuitively uses the English arrogance to force them across the bridge. One report suggests one of the commanders had even slept late. Can you see him being shaken from his cot, tumbling out of his tent, and responding in anger at the sight of Wallace?  A huge man by the standards of the day, but the leader of an untrained rabble – someone who needs to be taught a lesson!

At the end of the battle, Wallace orders King Edward’s treasurer, Hugh de Cressingham, known by the people as “the treacherer” for bleeding Scotland dry to fill Edward’s war chests, to be skinned and has a scabbard lined with his skin. Thus did Wallace gain the reputation of being a brigand and a bogle.

Those who escaped the carnage rode back to England with their tails between the legs. Perhaps that’s when the Scots began calling the English “tailed dogs!” Something which irked them no end!

Wallace and his men showed enormous courage and bravado that day to stand before an English force and shout jeers. Fortunately, they could back up their actions: they won a mighty physical and psychological victory which cemented in the minds of the Scots, Wallace’s greatness as a man and as a leader. He used fear and jibes to get under the skin of the English commanders and gave the Scots back their sense of purpose and pride. The tide had turned …

(Photos courtesy of Education Scotland and the BBC)

William Wallace and the Battle of Stirling