No one was more surprised than Canadian writer, Lucy Maud Montgomery, when her children’s tale, Anne of Green Gables, became an international best seller.

Maud, as she liked to be called, had been earning money from her articles and poems, selling them to various papers and publishing houses. She held no illusions about the quality of her writing, but simply loved to write and to bring the characters from her vivid imagination, alive and kicking onto the page. A rich vein of quirky humour flowed through her stories and their simplicity appealed across a wide age group. To our 21st century tastes, these tales may now seem banal and the prose too flowery.

Born of strong, Scottish Presbyterian stock, like many on Prince Edward Island, Maud upheld the values of her grandparents with whom she resided from a young age: her mother had died when Maud was young and her father worked away, eventually settling in western Canada.

For a woman in the early 20th century, she achieved a great deal: studying at Dalhousie University; and working for a paper in Halifax, editing text. But her journalistic career ended when she returned home to become a carer for the last eight years of her grandmother’s life. Though Maud’s writing was limited to early mornings and late at night, she was known to be  prodigious reader and pen-friend, writing on the many subjects which interested her: all this whilst cooking and cleaning in a home lacking the labour-saving devices we now take for granted. Gardening was a passion which gave her great joy and she delighted in nature, especially walking in the woods around her home. 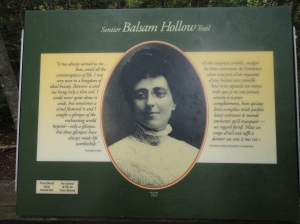 As a youngster, I found Anne’s traumas and adventures compelling reading, and was immediately drawn to the beauty of Prince Edward Island’s landscape of forest, red soil roads and the ever-present sea. Thus during my recent trip to Canada, a visit to PEI was a must!

At the Green Gables National Park, I was able to walk down the pathways of my own childhood imagination to visit a faithful rendition of the family home. It was a huge treat: even the wallpaper was matched closely to Maud’s grandparent’s home (her inspiration for GG), as well as the furniture and layout of rooms. 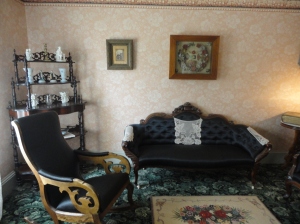 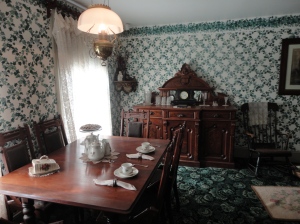 The formal parlour and dining room of Green Gables 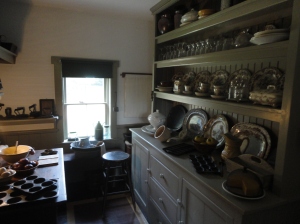 The kitchen. A close up of the hallway wallpaper.

Anne and Marilla’s bedrooms. There’s even a potty under the bed!

In reading about Maud’s life, I am reminded that a great sense of duty, dogged perseverance and a commitment to hard work were key to the success of pioneering Scots wherever they made their homes. And her family were no exception. Indeed, after her grandmother’s death, Maud married a local minister following a very lengthy engagement. On their honeymoon, the couple took a three month grand holiday to Europe where Maud was able to explore the highlands and lowlands of Scotland to her heart’s content. It was a brief, joyful respite before her husband’s role took them to Ontario, away from her beloved PEI.

Despite an ongoing battle with anxiety, depression and fatigue, Maud made a fine minister’s wife, tending the parish flock beside her husband, running meetings and dealing with the full gamut of associated tasks. But once again, she had to place her writing – her life’s supreme pleasure and at times painful challenge – second place to duty.

Maud went onto have three sons, one of whom was stillborn. Before death claimed her, she was able to visit the island several times but always found the past with all its memories too haunting. Highly strung and passionate in nature, Maud’s ability to experience life’s greater and lesser tragedies so acutely was almost too much for her to bear.

Mollie Gillen’s biography of LM Montgomery,The Wheel of Things, is well worth reading for the many insights it offers into her life, personality and motivations.

As a writer, I was intrigued to read of Maud’s breath-taking success as well as her literary near-misses and contractual problems with publishers. On a personal level, her capacity for friendship was hampered by an almost unbearable desire for solitude so that she could dream her dreams and write her stories. Despite rising to great heights of fame, Maud continued to be torn throughout her life by the conflicting demands of duty and talent. Above all, she was an extraordinary woman who made a lot of people happy – my ten-year-old self included!