Sisters of The Bruce

I’m here to tell you that Scottish independent book stores are alive and kicking, and punching well above their weight! That’s not to say times aren’t tough with online bookstores flourishing. For such a small country with just over five million people, Scotland has an astounding literary tradition. It celebrates this heritage in supporting independent bookstores and countless book festivals are run each year. And with such an inspiring landscape, it is a veritable paradise for writers!

On my most recent visit, I was welcomed at many of these wonderful small institutions across the length and breadth of the country.  Come with me on this intriguing journey…

Here are some of my favourite book stores whose shelves, I’m pleased to say, hold copies of my novel – ‘Sisters of The Bruce’.

As a self-published author, the challenge is to have your work accepted on its merits rather than dismissed by superficial judgements about self-publishing as a whole.  Historically, many Scots both…

I’m here to tell you that Scottish independent book stores are alive and kicking, and punching well above their weight! That’s not to say times aren’t tough with online bookstores flourishing. For such a small country with just over five million people, Scotland has an astounding literary tradition. It celebrates this heritage in supporting independent bookstores and countless book festivals are run each year. And with such an inspiring landscape, it is a veritable paradise for writers!

On my most recent visit, I was welcomed at many of these wonderful small institutions across the length and breadth of the country.  Come with me on this intriguing journey…

Here are some of my favourite book stores whose shelves, I’m pleased to say, hold copies of my novel – ‘Sisters of The Bruce’.

As a self-published author, the challenge is to have your work accepted on its merits rather than dismissed by superficial judgements about self-publishing as a whole.  Historically, many Scots both at home and abroad have heralded new approaches due to their ability to think along non-conformist lines. Their high standards and generosity of spirit set the bar high for the rest of the world. 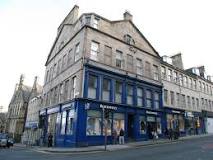 The Watermill Book Store in Aberfeldy

Let me tell you about the first time I saw a ghost…
Roslyn Castle rests on a rocky promontory overlooking the River Esk in Scotland, some nine miles from Edinburgh. A winding internal staircase connects five stories linking the kitchen, bakehouse and storerooms to several floors of living quarters above.
It was dusk – gloomy as charcoal, and as damp and gritty, as befits any ghost story. What did I see, you ask? A white lady perhaps drifting about, bemoaning the loss of her lover? Quite the opposite in fact!
Below me on the stairs I caught a glimpse of something moving! It was no spectral figure but as firm and solid-seeming as any human. His shoulder length hair was straight and dark and his outfit, rough brown homespun. He passed a few steps below me and disappeared around the corner down the stairwell. Did he see my gob-smacked look or hear my sharp intake of breath? I think not, but went on his way going about his business – perhaps as he had done for hundreds of years.
Some say that very old places absorb the energy of those who live within their walls. If so, then perhaps I caught a moment in time, replayed. I consider myself fortunate indeed!
But what else has happened in this ancient place?
# Sir Henry Sinclair, Lord of Roslyn and Earl of Orkney and Caithness, is believed to have built an earlier castle sometime in the 14th century. In succeeding centuries, the castle has been reconstructed and configured due to wars and changing allegiances.
# Back in 1303, a group of Scots vanquished an English force in Roslin Glen.
# Sir Henry’s grandfather fought at the Battle of Bannockburn with Robert the Bruce and his father later lost his life at the Battle of Teba in Spain, accompanying a group of knights taking King Robert’s heart on a symbolic crusade to the Holy Land – part of the king’s final wishes.
# Sir Henry was the grandfather of Sir William Sinclair, who was thought to have built Rosslyn Chapel, which lies just a few hundred metres away, close to the village of Roslin. (I’ve not yet understood the need for different spellings.)
Many unconfirmed legends abound about Sir Henry, one in particular refers to him sailing to the Americas one hundred years before Columbus.
One of the fascinating stories about Roslyn Castle relates to a domestic fire in 1488. The castle held a scriptorium which housed a number of precious manuscripts. Before saving himself or his family, the lord of the day ensured the manuscripts and charters were lowered to safety from one of the windows down into the glen. Some of these manuscripts now rest in the National Library of Scotland.
Perhaps these stories have fuelled the tales relating to the Knights Templar and the Holy Grail. No doubt, treasure hunters and conspiracy theorists would love to explore the dark chambers and floors of Roslyn Castle.
On the day of my ghost sighting – a decade ago now – I saw a large excavation, fresh-dug, in the ground floor of the castle storeroom. Bracken and bushes lay scattered about. An open window let in bursts of wind and chilling rain. Close by, a chamber had been walled up. Why? And by whose hand or claw had the hole been made?
Of such mysteries are legends made!

Step forward into more recent times, 2014 to be exact. And here are some photos of another, less sinister, exploration – this time, around Roslyn Castle’s extraordinary walls. Weathered stone and unusual fungi add their own unique touch to this intriguing site.

There are many ‘thin places’ in Scotland where the past is a mere breath away. Let me take you to one of them …
On the outskirts of the village of Scone sits the ancient site of Moot Hill where Scottish kings were once crowned – upon a large, low mound constructed over the centuries from handfuls of earth brought from all over Scotland. With the symbolic sprinkling of soil, loyal adherents would kneel and swear allegiance to their king.
Today a replica of the Stone of Destiny – upon which these ancient Scottish kings were crowned – sits before a small chapel. Legend has it that the stone originally came from Ireland to Dunadd, Argyll in western Scotland where it was used to crown Kenneth MacAlpine, a 9th century king of Dalriada. From time to time, the stone has been described as black – perhaps part of an ancient meteorite – and carved with all sorts of strange symbols. By all accounts, it was no ordinary stone and would roar if the the rightful king sat upon it. Such layers of myth and legend certainly add to its mystery!
Much later, a more strategic royal site was established at Scone in Perthshire, one presumed to be safe from the incursions of marauders … until late 13th century. During the first War of Independence, the ‘Hammer of the Scots’ stole the stone and built a wooden seat over it for future royal crownings in Westminster.
Some believe that a replica was substituted to outwit Edward’s plans and the original is still hidden somewhere in Scotland. However, a group of students back in the 1950s executed a heist and brought the Westminster stone ‘home’ to the Abbey of Arbroath. The police were involved and the stone returned to London. Years later, after much outrage, this particular stone was returned and now sits within the stout walls of Edinburgh Castle. Is this sandstone block the original Stone of Destiny? Who knows?
Robert the Bruce was crowned at Scone on a spring day back in March 1306. Perhaps the canny monks brought out the stone they had concealed so well? Though an uncertain future lay ahead, it must have been a wonderful occasion.
These thoughts and more were in my mind on the day of my visit – another spring day, some 700 hundred years later, I could hear faint echoes of cheers and laughter. Long live the king! Long may he reign!
A ‘thin place’ indeed!

Whenever I lay eyes upon a cathedral, the desire to cross over the threshold becomes a compulsion. My feet yearn to walk upon stone steps hollowed by ancient footfalls. Inevitably, I push open the heavy carved doors to see what’s inside. And it was no different during my last visit to Orkney…
St Magnus Cathedral rises majestically above the texture of Kirkwall’s low skyline; its red and yellow sandstone walls first saw the light of day back in 1137. A Viking earl – or yarl, Rognvald, wanted a resting place for the relics of his uncle, St Magnus. Both were great men by all accounts.
Until the 15th century the cathedral was managed ecclesiastically from Norway by the archbishop of Nidaros (Trondheim). When Orkney became a Scottish possession, it came under the sway of the church in St Andrews.
The Reformation wrought few structural changes but with the removal of any religious regalia and walls, whitewashed, the church was brought reluctantly into the Protestant world. Renovations took place in the 19th and 20th centuries, including removal of the bland whitewash to reveal warm layers of sandstone, and decorative tiles were laid, probably over stone flags.
It was such a joy to explore the peaceful interior and wander midst the massive colonnades. On a sunny day, the sun streams in from the windows high above and the golden tones of the sandstone bring to life the detail of wood carvings and old grave slabs, some of which have been elevated to the walls. It would be equally lovely amongst the shadows cast by candlelight. The history of the place is palpable. Well worth a visit, if you find yourself in this northerly paradise!