Picture this…. a vaulted ceiling, a stone-walled chamber dressed with tapestries of hunting scenes; a small group of men share a drink –  a celebratory symbol of friendship and respect.

Bannockburn is behind them; the battle won but not the war.

Buttressed by his magnates, King Robert the Bruce accepts oaths of continued loyalty. He holds a bowl – a solid piece of carved maple. In its centre, a silver boss holds a lion surrounded by heraldic shields, each one representing a great family of Scotland. Wine is poured into it. He drinks and passes it to the next man. A smile, a nod passes between them.

Whenever I see the Bute Mazer, at the National Museum of Scotland, this is the scene which unfolds before me, full of portent, critical to the time. 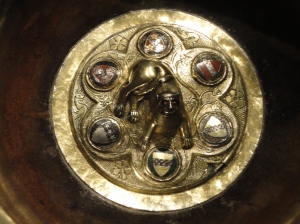 So how did this bowl come to be made? Medieval Scotland – there’s a lot at stake but the men who support the king want to be recognized for their contribution to the cause … the fight for independence. History tells us that one of Robert’s supporters, Sir Walter Fitzgilbert, keeper of Rothesay Castle on Bute, kin of the Stewart family and thereby tied by blood with the Bruces, had it made for ceremonial purposes to demonstrate the king’s authority. As a statement, it broadcasts wealth and status.

The bowl in the museum has had a later addition of a silver rim and ornate lid added, probably in the 16th century, but its core is original, the oldest surviving Mazer of the time. A stunning object! 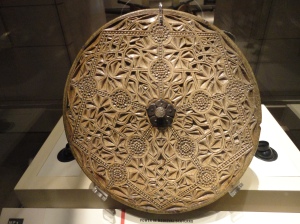 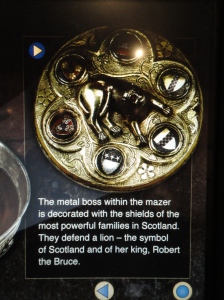 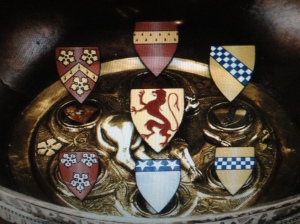 Ceremonial drinking cups have long been used by the people of the Baltic regions, and were stave-built with overlapping pieces of wood, similar to the construction of a pail. Some believe early Druidic Celts used them for catching the blood of sacrificial victims.

Today, the quaich, as it is known in Scotland, is a special gift – sometimes made of silver or pewter, often carved with Celtic symbols. Though it looks different from the Mazer of old, its use generally remains the same, a symbolic recognition and deepening of  friendship and respect. I have one on my shelves and it means the world to me.

Throughout history, there have been some variations. Some had glass bottoms so the canny drinker might keep an eye on his companions; others held a romantic purpose with double-glassed bottoms, holding a lock of hair from a loved one.

After the Battle of Waterloo, he visited the site, taking a piece of wood from an elm tree (the Duke of Wellington’s command post) as a keepsake and had it made into a quaich. In his collection, there were several pieces made from commemorative wood – the Falkland oak, Queen Mary’s Yew, the Wallace Oak. Another precious quaich in his collection was in use by Bonnie Prince Charlie when he traveled from Edinburgh down into England in 1745.

Sadly these treasures, and many others, were targeted by modern day thieves.

Another treasure at the National Museum is the Ugadale Brooch. The original was purported to have been given by Robert the Bruce to a Mackay man, a tenant farmer on Kintyre, in return for his aid, when the king was on the run – hungry, cold and homeless. He later received a gift of two farming estates so that he was no longer a powerless tenant. The brooch pictured here dates from the 15th century. The top opens to reveal a holding place for a relic. I hope, somewhere at its heart, is the original – a defining symbol of respect and friendship calling to us from the past. 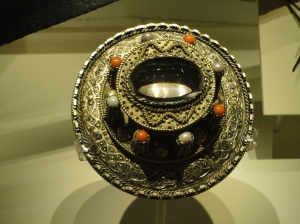