It’s a real treat to wander the streets of Edinburgh during the Fringe Festival in August. Normally I would prefer a quieter time but the crowds and the casual street performances electrify the medieval atmosphere.  There’s so much to see and if you have the time to check out the well organised, full programme of comedy shows; you certainly won’t be disappointed. 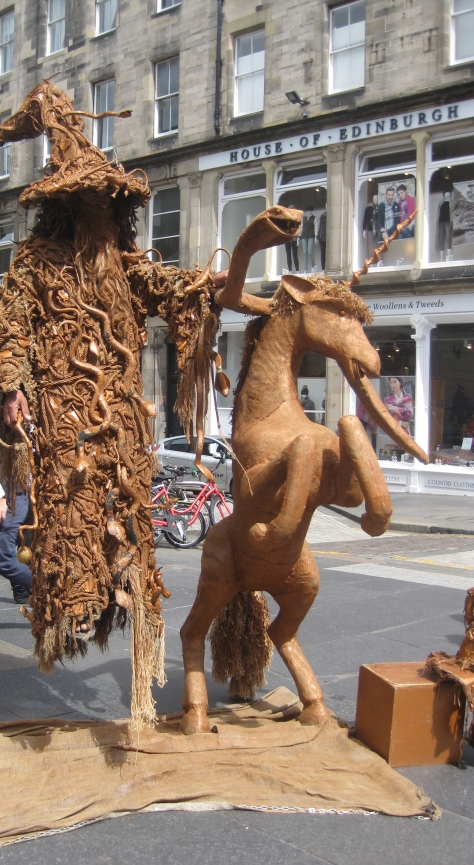 I was fascinated by these amazing actors, who appeared to be suspended  in mid air.

But the playful nature of these characters changes as you wander up Castle Hill. On your right, you will find a poignant memorial to the Scottish witches who were murdered on this site. Now it is a bustling place during the day, and at night, the Tattoo works its magic on the crowded stands of temporary seating. For many people, the spectacular military and musical display of the Tattoo holds a ‘bucket list’ significance.

After being singled out for their healing or heretical differences, hundreds of generally innocent women, and men, were condemned to horrific deaths by strangulation, burning and drowning down in front of the castle – during a period when fear and persecution reigned supreme. This happened in many parts of the world but the anti-witch fervour seemed to take root, fueled no doubt by the written works of King James VI of Scotland who believed himself a victim of witchcraft.

So beneath all the light-hearted frivolity of the festival,  it pays to remember the dark past of this glorious city. For it is here, right before the great castle, you are literally walking  in the footsteps of the dead… and, I expect, the very angry dead!